Nas and I recently did a talk show when we were in Albania. I was looking forward to it, but was shocked when the host asked Nas if he travelled the world to meet different girls. Very disappointing.

Please don’t laugh when people make sexist, racist jokes. Our laughter is our support. If they tell you you’re making a big deal out of nothing, tell them sexism is a big deal. If they tell you it’s just a joke, say that jokes at other people’s expense are not JOKES, and are not funny. 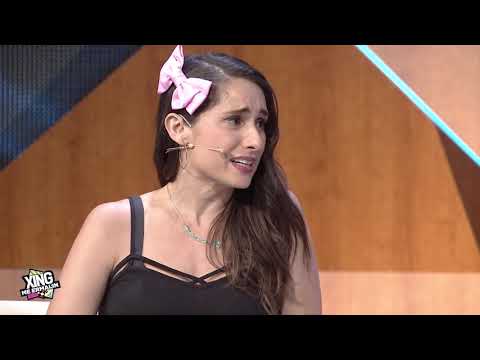 P.S. We reuploaded this video because this channel wants attention and views and I don’t want to support them in doing that.

Ermal (the host): Here now will come a girl that wants to ask you a question Nas. Are you ready?

Ermal: Arber are you ready? Coz u are already used to these kind of things. (Public laughs).

Ermal: Nas, don’t turn around, because other than her eyes, you will see a couple of other eyes (referring to her breasts). Alyne, you can see, but Nas can’t. (Ermal laughs).

Kejvina: I will say it in Albanian coz I’m not good at English….. So, ummm, I don’t know how to formulate it.

Ermal: Say it in Albanian darling.

Kejvina: You travel quite often. But how do you find time to dedicate it to your girlfriend?

Ermal: No no this is not the question

Kejvina: Yes this is the question, because we changed the previous one. Don’t try to put me into an argument with other people!

Ermal: Come here and read it how it’s written

Kejvina: But we’ve changed it….

(someone talks from the backstage) Ermal: Ah, they didn’t want this question?

Nas says WHO CHANGED THE QUESTION

Ermal: Who changed the question then?

Ermal: Ah so you Arber changed the question?

Arber: The question was “when you go on trips, you do that to meet girls?” but to me it makes no sense as a question, because Nas is all the time with Alyne!

Kejvina: This question is very uneducated and inappropriate!

Ermal: No no no, keep the question you had before.

Ermal: We have the question now!

Alyne: This is not funny. Women in Albania are treated like shit.

Ermal: This was a stupid question

Alyne argues with Ermal about who’s insulting whom.

Ermal: Let’s do another question

Alyne: People should hear this.

Ermal to Kejvina: Look, ask this question to make it up for the previous question. You’re gonna ask “in all the places you’ve been, where would you like to propose to your gf?”

Kejvina: Ok this is better.

Kejvina: (jokingly saying) Now I will look at Arber while I ask the question because I am afraid to look this way (meaning Nas and Alyne might get angry again).

Ermal: Now ask the question I told you

Kejvina: No, it would be better to ask “in which of the countries would like to live with your gf”, not where to marry her. Maybe they don’t wanna marry, why should we force them to admit now?

Ermal: Please ask the marriage question. Ok we have the question

Alyne: Just cut anything that I said that offends Albania, coz I like Albania.

Kejvina asks the question about the wedding.

Nas: This is a boring question.

Ermal: I hope your girlfriend likes this question

Ermal: Thank you Kejvina. This was one of the most uncomfortable questions Kejvina has done throughout 3 years of this programme.

And here are some of the awesome responses people sent!

We want to highlight the people who care and empower women. Here are some messages I received that gave me hope for the world.

(I’ve cropped out their names in case they want privacy!) 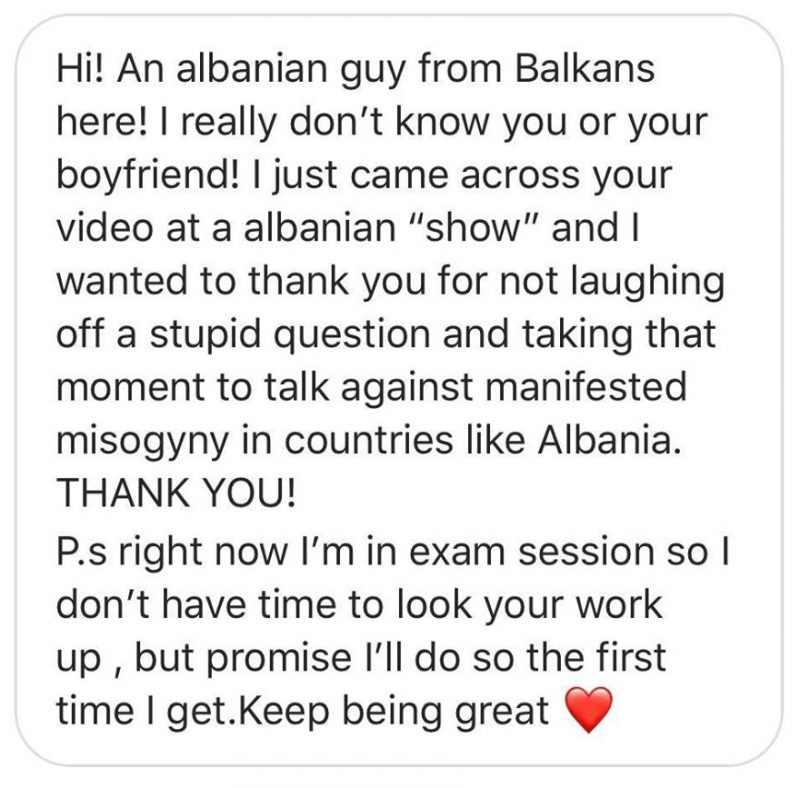 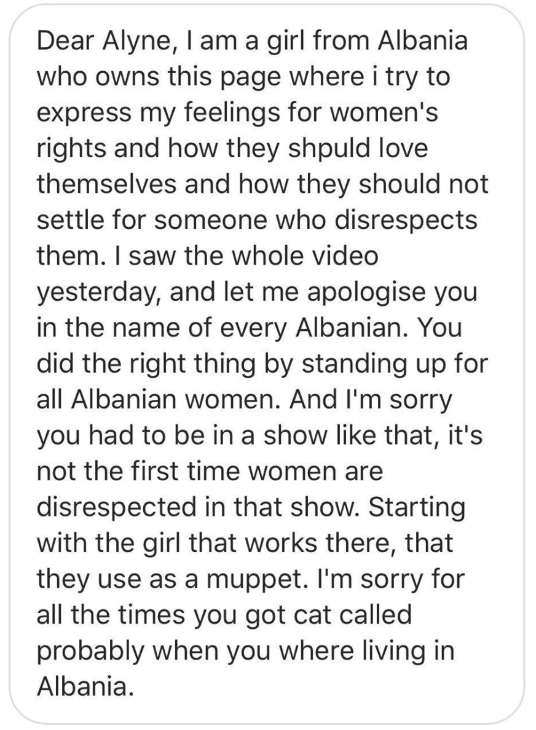 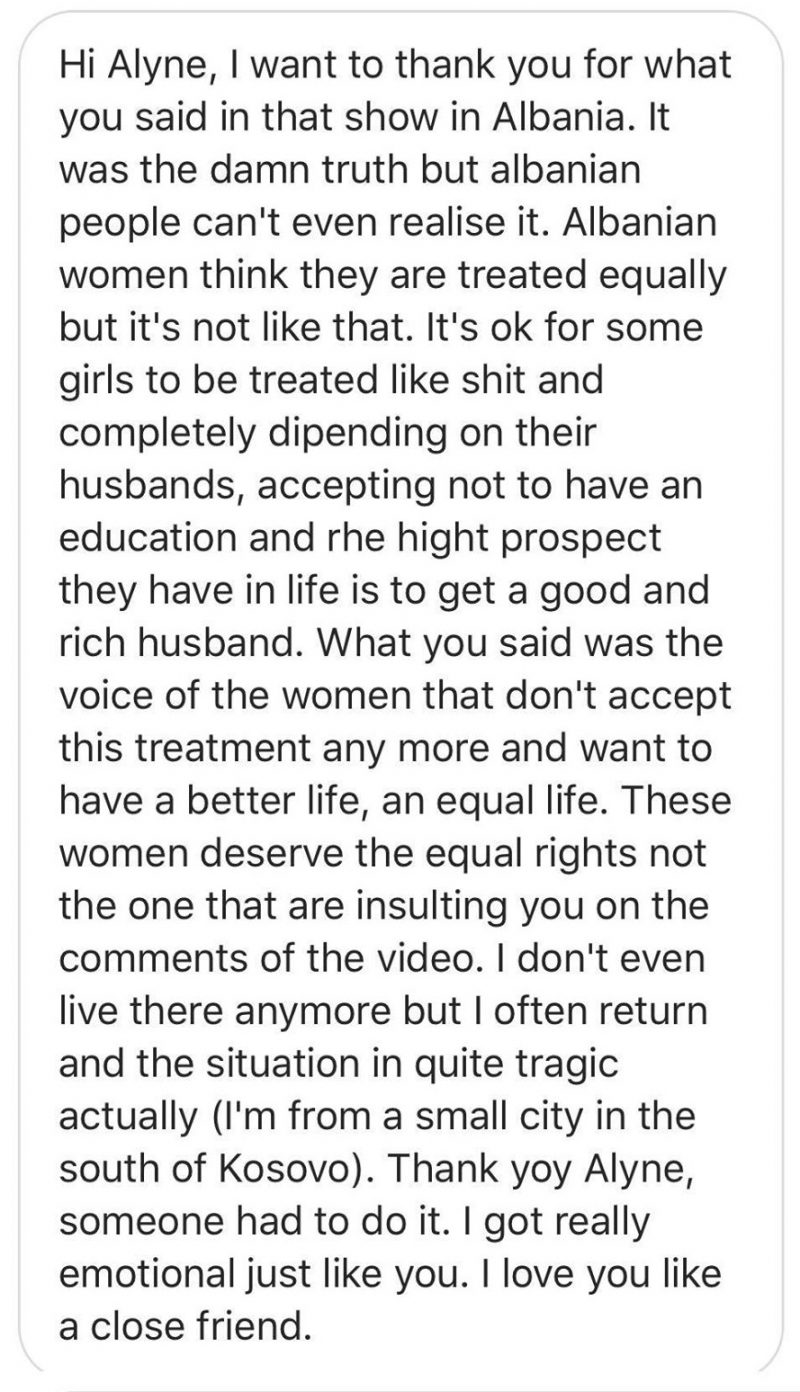 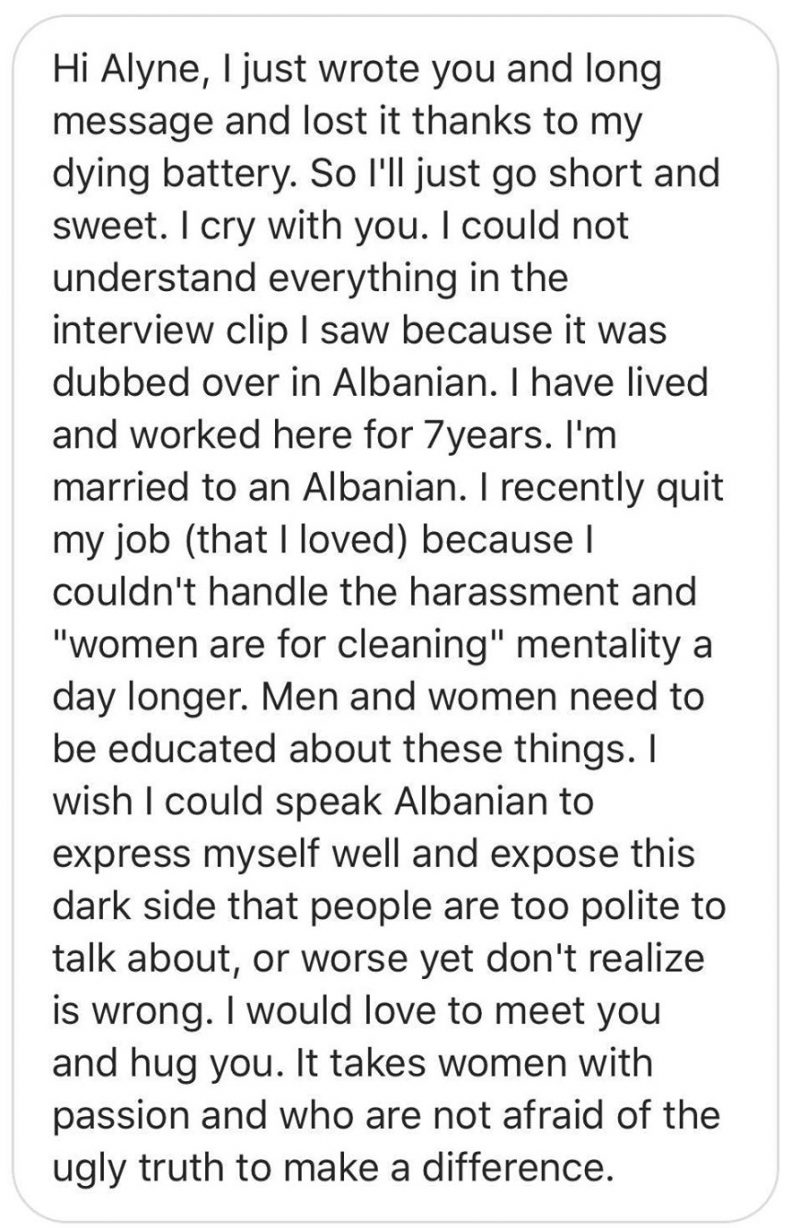 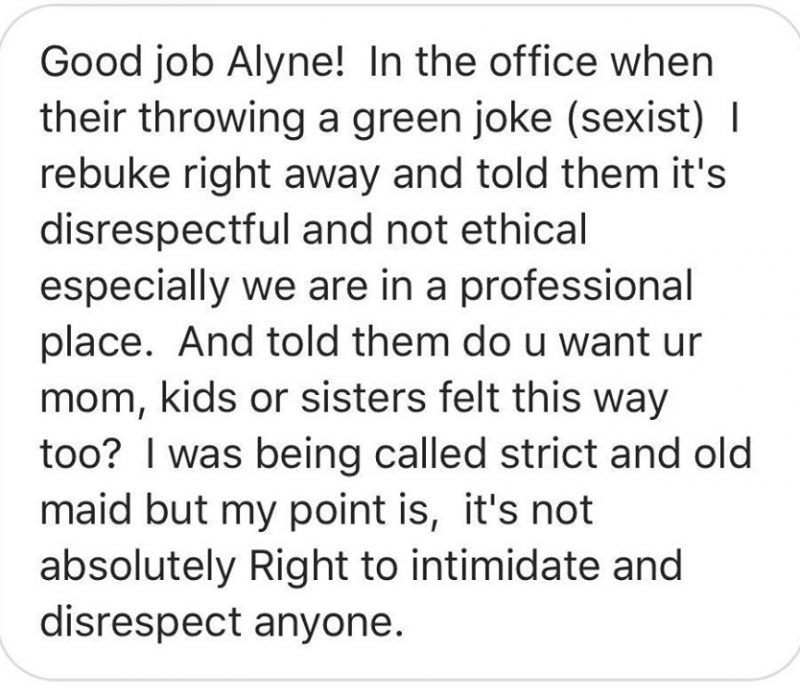 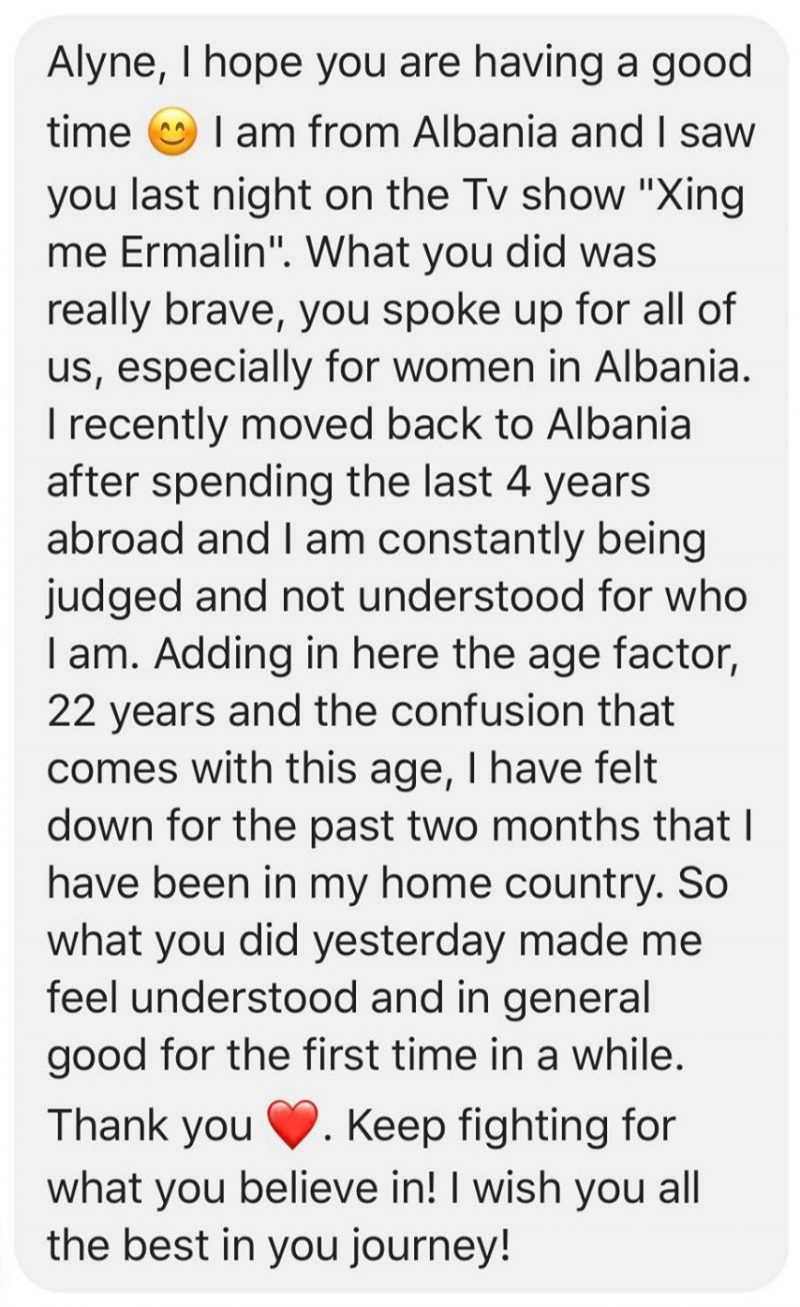 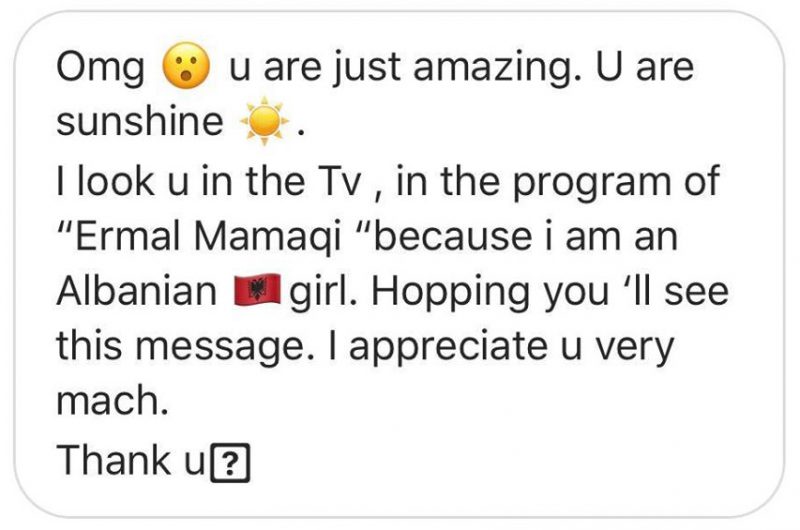 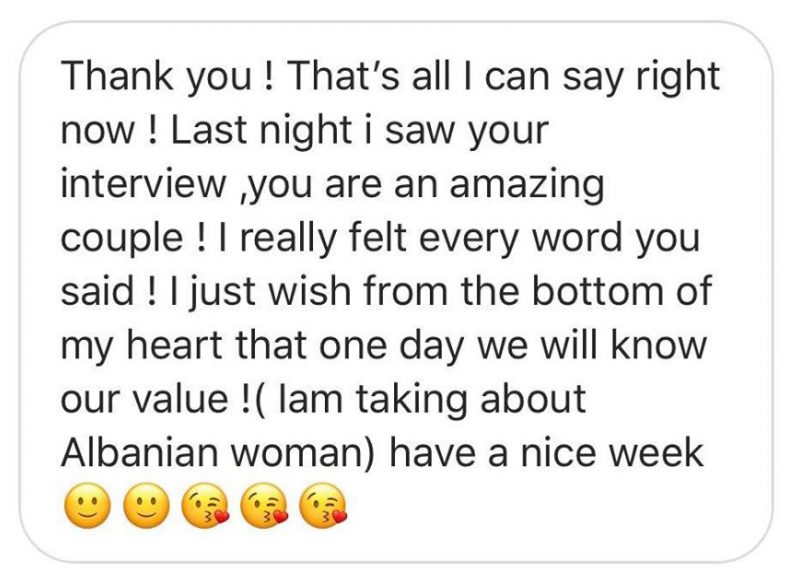 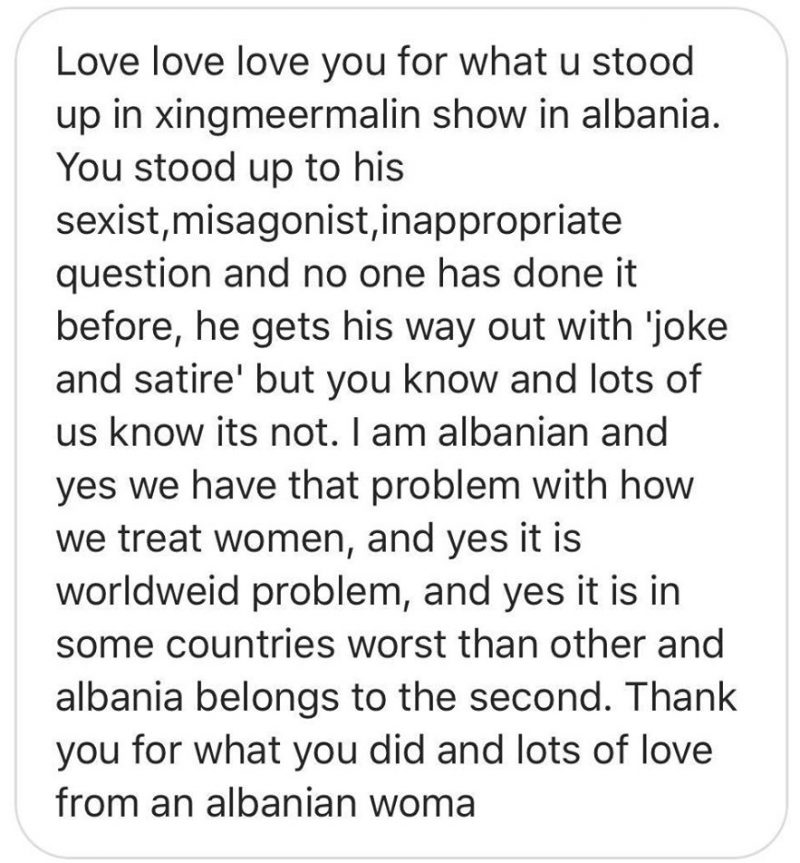 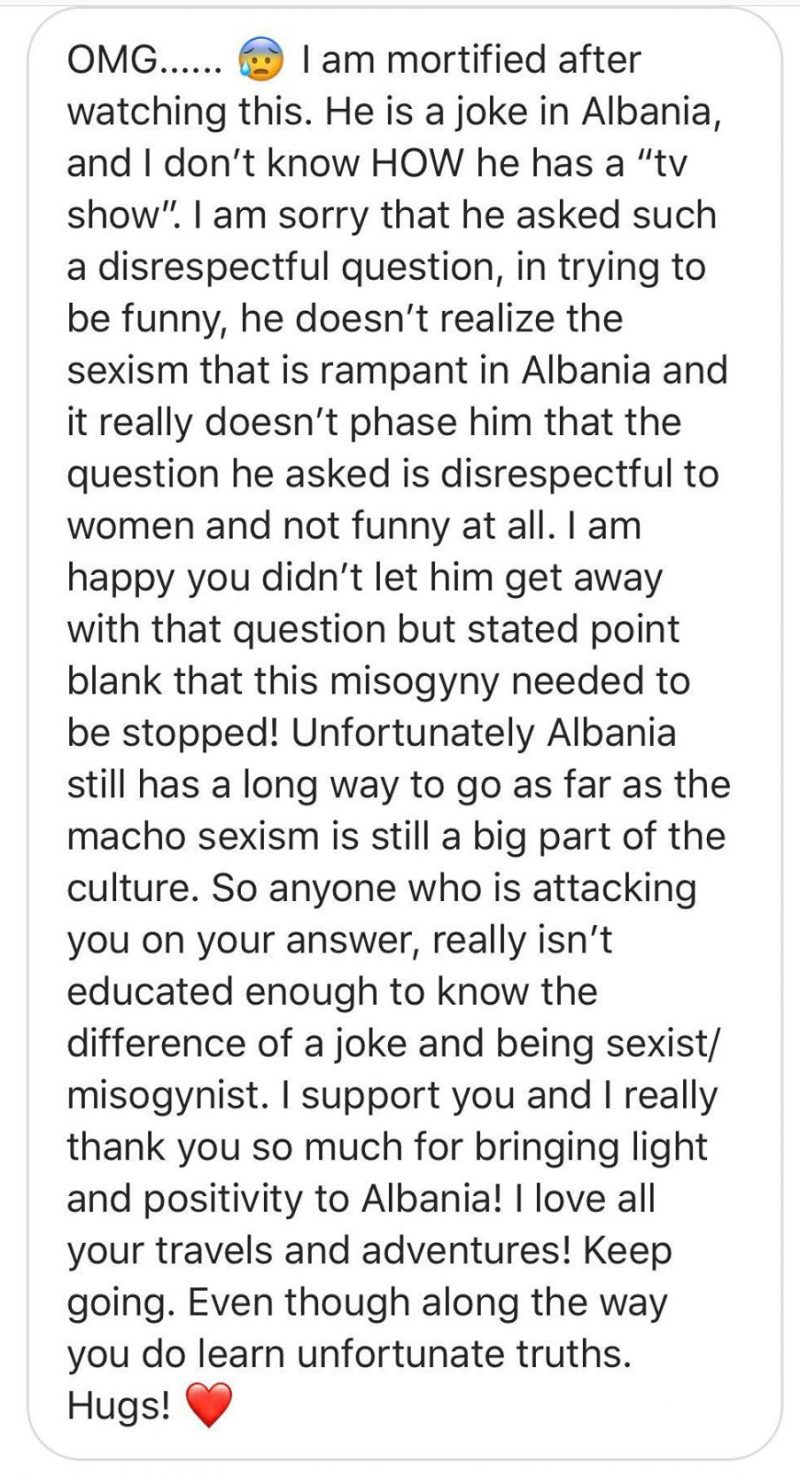 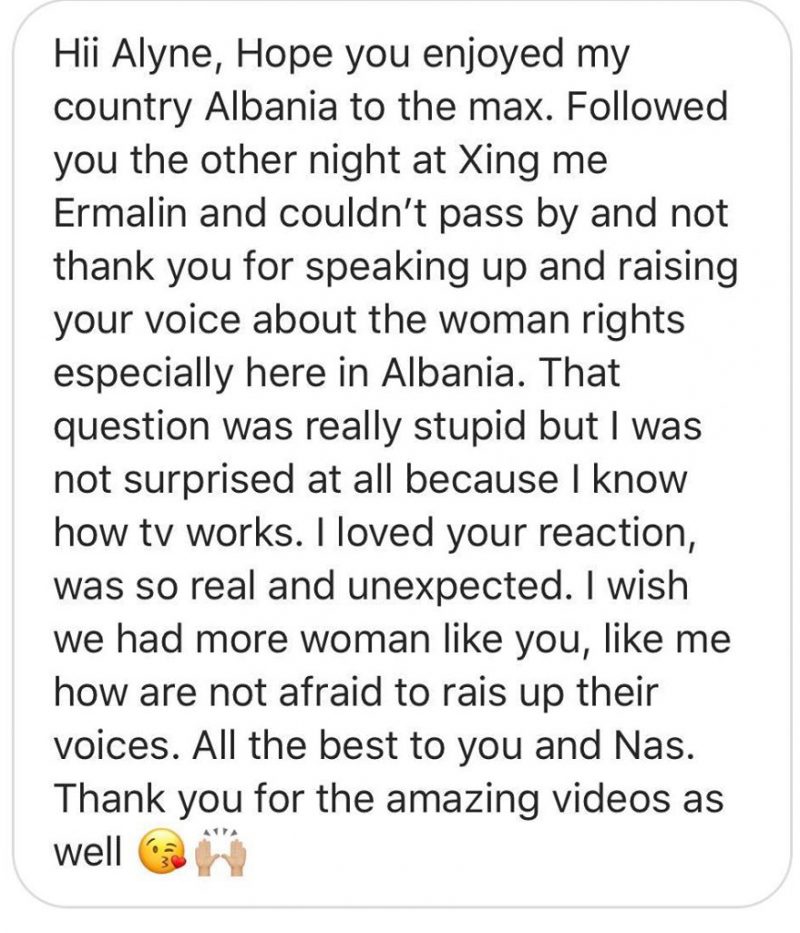 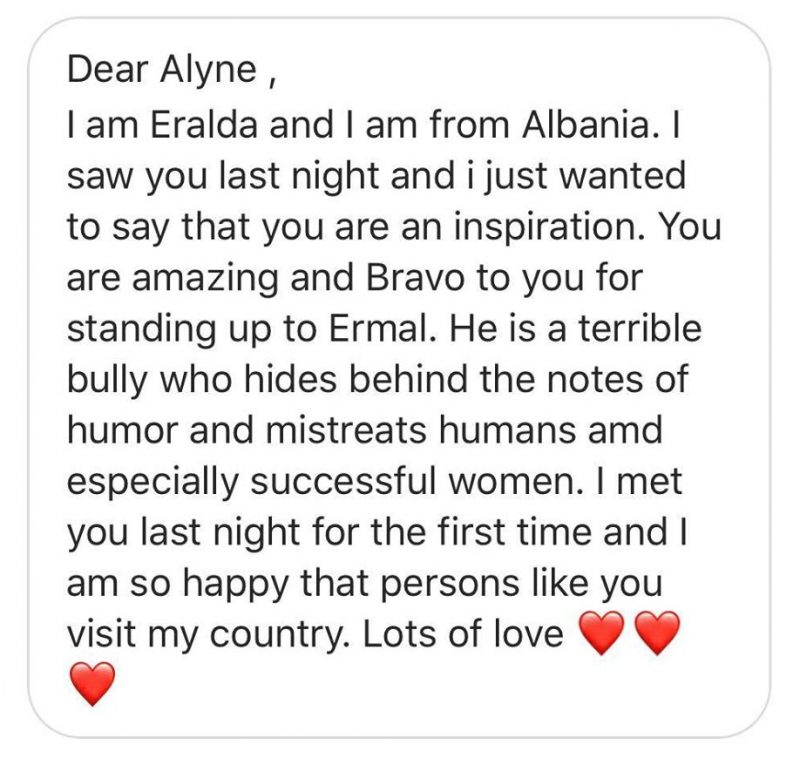 Here’s why we should support single parents more

5 Things I wish I knew before becoming a digital nomad

How one girl was bullied into buying her first bra

I am poor, but I found a way to become a researcher

I followed my passion of studying at 39 – GGG

My life changed, and a big reason is Girls Gone Global – GGG (Part 3/3)